The back room at Modern Times Bookstore was packed with about fifty people and the mood was celebratory. One of the former NJA members brought a box of files and everyone was looking through them excitedly. Sascha Scatter introduced me, which was especially sweet because we know each other through anarchist circles and his parents’ NYC activism stories overlapped with New Jewish Agenda. Marissa of Thread Makes Blanket, also in SF at the time, read part of Rachel Mattson’s essay. Then Avi Rose, one of the interviewees for the book, spoke briefly – what a pleasure to meet him and hear him share thoughts on NJA in person! More NJA members shared stories and realizations about roots of so much of the current progressive Jewish culture of the Bay Area in NJA: synagogues, music festivals, film festivals that originated in NJA meetings. A question about the finances of NJA led into a conversation about how NJA’s gutsy connecting-the-dots between so many issues was enabled by being accountable to a membership base rather than a single foundation. Another audience member whose mother was in NJA talked about how much this membership-funding issue matters to him, how he and his mother talk about it as a key issue in how to build a sustainable Left. Members of Bend The Arc: A Jewish Partnership for Justice and Jewish Voice for Peace attended and made announcements, and another attendee announced that a Labor History festival was going on that week. This event was so spectacular – such engaged conversation, and joyful connected energy.

This event was at Reading Frenzy bookstore, a specialty bookshop/gallery/event space devoted to supporting independent/alternative media and culture. The store’s founder, Chloe Eudaly, used to be on the advisory board of an organization I co-founded with Billy Wimsatt in 1998! Very cool reminder that activist collaborations can be long-haul relationships and you never know when you’ll end up working with someone again.

The room was full with about twenty-five people, a half-dozen of them former-NJA members. I was happy to meet many of the activists that Jenny Levison had talked about at the NYC event, and hear more details about NJA Portland’s anti-racist activism, Cousins (Jewish-Muslim) groups, and other local chapter activism. I was especially moved by one part of the conversation when a former NJA-member shared that he was upset that NJA didn’t get any credit for shifting the conversation about a two-state solution to be more mainstream, like when the Oslo accords were signed in 1993, none of the Jewish press acknowledged NJA. Another former-member said she felt differently – she felt like they had done the work and could know that they had made a difference, even if the mainstream Jewish world didn’t acknowledge it. I really appreciated that both NJA members were there to share their different responses.

Another woman spoke very powerfully about being the same age as the NJA-members in the room but she hadn’t found NJA when she needed it. In 1982 she was horrified by Israel’s invasion of Lebanon and when she tried to talk to her rabbi about it, he told her not to air the community’s dirty laundry in public. She said that she cried for a week and really broke with the Jewish community at that point. Now, so many years later, she’s an activist and poet devoted to working for peace in Israel/Palestine, but it took her a long time to find her way back to Jewishness and she wondered what her life would’ve been like if she had found NJA. (For more about these historical events, see this page about the Middle East Task Force)

One of the NJA members said “Ok so we’re telling our stories, but there’s all these young people in room and I’m curious what brought you here today? Are you looking for Jewish Progressive culture?” Other NJA members chimed in with similar questions. This led to a conversation about intergenerational organizing, and what the progressive Jewish activism landscape looks like in Portland today.

The event in Olympia was different from the rest in a few ways: my dear longtime friend Socket Klatzker hosted a book discussion and BBQ in her back yard and the group was a lovely collection of about fifteen radical Jews and other activists from Olympia (and a car-ful from Seattle!). Though the group was all people roughly people in our 30s, there was a bunch of diversity in terms of people’s relationships to Jewishness and activism. After some time for kibbitzing, schmoozing, and noshing, we sat on picnic blankets and I said that this event was a different model than most, and something of an experiment about how to do a rich conversation together, so let’s go around and introduce ourselves and also if you have any specific questions or areas of the history you’d like to focus on, let me know. People had great questions in that go-around and as the conversation moved along, and we had a great conversation about a bunch of things, but one that stands out for me is the issue of building spiritual or other kinds of transformative communities within social change structures, for example the ways that NJA worked because it was a spiritual home for so many, and because of people not just doing activist work together but also sharing life cycle events, Shabbat dinners, yearly holidays and celebrations together, and a shared set of cultural values. But on the other hand, the impact of Re-Evaluation Counseling was very mixed and controversial in the group, and they also had to actively kick out people trying to infiltrate from the New Alliance Party. (More about these stories on this page).  We talked about Andy Cornell’s recent book about Movement for a New Society and the overlaps in the organization stories/lessons – this was especially gratifying for me because I know Andy through anarchist West Philly life and I think of our books as sister research projects, but also because it deepened the conversation to add critical analysis of another group into the mix.

This event was held at The Vera Project and hosted by my dear longtime friend Alix Kolar. The room was full with about 25 people including three fabulous former-NJA members in the group.

Content of this conversation had similar themes to the other events, but there were a few moments that especially helped some ideas click for me. One NJA member (and former national co-chair) was communicating very clearly about how hard it was to be in the organization, how the wins were momentary and the challenges were ongoing. For me, that led to a clarity about how the community element of local NJA-chapters must have been the other ongoing factor that sustained the groups beyond the momentary wins. In another instance, a friend who I used to work with in the Sylvia Rivera Law Project collective asked a great question about membership structures and fundraising which related to our work and research together – the question made something click for me about how much I’ve been applying my NJA research in my own work. Another question about how NJA worked with “most-impacted communities” led to me a new clarity about NJA’s commitment to a “change not charity” model – I was reminded of Melanie Kaye/Kantrowitz’s writing about this in a section of The Issue is Power that originated as an NJA document. This was a very rich conversation in general and I’ve got video footage that I hope to post in some clips soon. Thanks again to all who came!

The next night I attended a potluck gathering of seven former NJA-members organized by Rainer Waldman Adkins. What an awesome evening! Rainer was really interested in exploring the way that Seattle had played a key role in NJA, including a ton of national-leadership positions being filled by women from Kadima, NJA’s Seattle chapter. I got to hear a lot of details, and I took notes so more on that soon. I was so happy to hang out with these deeply radical Jewish activists a generation older than myself, and hear their stories. At the end of the event they said “you would have fit right in at NJA!” and I really felt my joy to be with this group of activists and intergenerational activist groups at each of the events this summer, and I felt a little sadness, too, about how much harder it is to find intergenerational radical Jewish community without a group like NJA to connect with.

About a week after coming back to Philly from the tour-adventures, I had a last tour event at Big Blue Marble Bookstore in Mt Airy which is a neighborhood of Philadelphia that many former-NJA members now live in. This was a small group full of wonderful Jewish and other radical activists. One story that really sticks with me: Rebecca talked about her brushes with NJA’s Feminist Task Force which essentially led to her finding Jewish lesbian community (and her first girlfriend). Knowing Rebecca now as a longtime radical queer and activist, it was wonderful to realize that NJA helped her find this path!

Here are a few photos from this Summer’s tour events. Thanks again to all who came, shared stories, offered questions, and learned together!

(Please Note: I’m not mentioning all of the people who attend and share stories at events by name, but I have done so where it seems especially relevant. If anyone wants to add to these report-backs or request that their name be added or removed, please do so! I’ll leave the comments open for this post so you can speak to it directly, or you can contact me here) 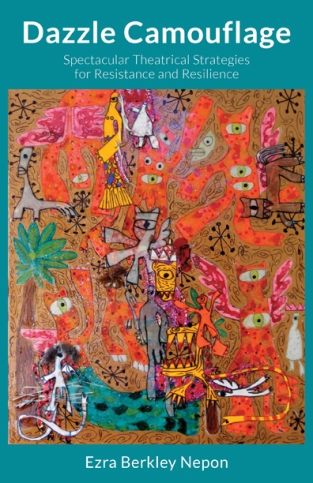